The first day began meeting Mark Crocombe at the Kanamkek-Yile Ngala Museum, a history centre containing Wadeye’s story of a shared cultural ethos between Rainbow, a culturally significant figure within the Thamarrurr region, and Father Docherty, a prominent catholic missionary.

We then began the project underneath the existing pavilion; an expansive steel structure previously used for the social club. We were introduced to Tobias and Scott, indigenous and non-indigenous members of the Thamarrurr Development Corporation, as well as some of the local men from Wadeye and surrounding country. The focus of the introduction was centred around learning from each other, and creating an environment of inclusion where we could all work towards a common goal. David O’Brien also began to introduce the scope of the project, in which he highlighted that both groups - the Bower team and TDC local workers - were still undergoing a phase of learning, and that we could learn a lot from each other throughout the delivery of the project.

It was then time to open the Wadeye media box, a shipping container sent from Melbourne holding supplies for the project, but also a structure to house the audio-visual equipment for the project. One of the local guys unlocked the container and everyone kicked into gear. Whilst we unpacked the container, there was a productive buzz and everybody became acquainted. We then broke off into smaller groups to begin working on different phases of work. The team assigned to the construction of the mens pavilion began setting out excavation and removing an existing structure. The media team began making shelves in the shipping container, and another team began constructing the form work for various concrete slabs and seats around the site.

Lunch time then allowed for some great discussions with the local fellas, learning more about them and their place within the community; who was from what mob and where their country was.

As the first day came to an end, the local kids slowly made their way over to the site. We all shared our names and a few cold oranges from the eski, and Nicola took them through her moonwalk rendition on a piece of slippery dust covered form-ply. We ended the day playing and laughing together and were all really keen to return in the morning. 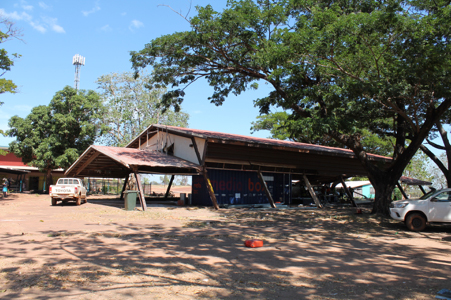 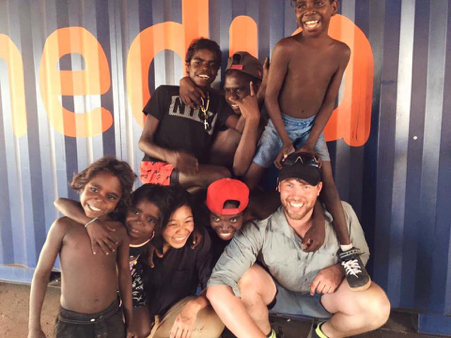