Day 4 began with an early start as we travelled back from Peppimenarti into Wadeye. The concrete truck arrived on site and the formwork for the screen was filled. A fantastic team effort between locals and students made light work of the six cubic metres of concrete required. The pouring of the concrete marked a high point for the project as the preparation of the formwork was finally rewarded.

On the south end of the pavilion additional purlins were replaced to improve the structure of the roof above. While this was happening students and locals worked together on the Mens Shelter, the ‘big shady’. With the concrete footings cured and ready, the team could fix the purlins to the rafters. A temporary scaffold was attached to the frame, for access and safety, as the team screwed the purlins in place.

The work on the front of the pavilion continued with the sign ‘Kardu Culture’ marked out ready to be painted. This led to some debate within the community about the translation and meaning of the phrase, which is translated literally as ‘people culture’. It was suggested to us that a alternative word to ‘Kardu’ could be used, however this is still being discussed.

Towards the end of the day, we marked out the location of the corten place making signs. They were positioned around the pavilion, to be visible from all approaches. The signs will tie together the cultural precinct and engage the entire site for our further designs.
The formwork for the seating at the front of the pavilion was poured, with all hands on deck to move the concrete across the large slab. Large polystyrene blocks were buried within the concrete to save time and materials, but proved treacherous under foot as some felt the wet sticky pull of the concrete below.

Tomorrow involves further work on the big shady, and more concreting to look forward to. 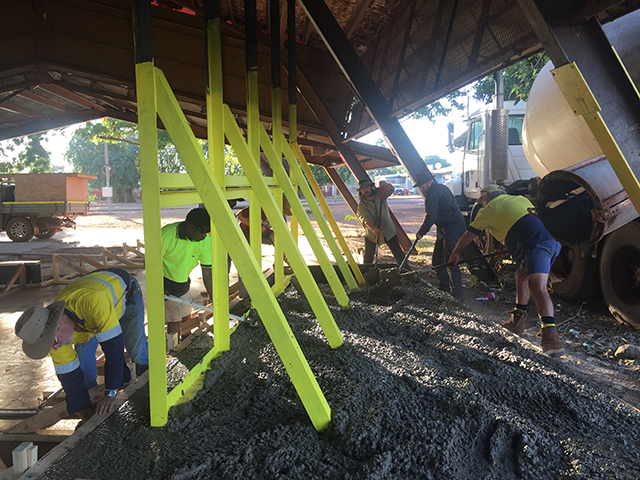 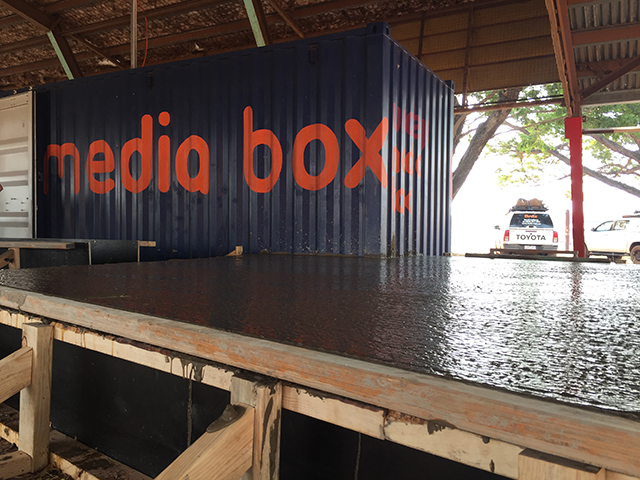