Another day began with a lot of expectation. After our efforts of prefabricating the pieces, it was time to begin putting up the first Shady. A truck owned by Gurindji Corporation was used to transport the tall SHS steel columns. With all hands on deck, we began moving the taller columns into the footing holes. The challenge did not end there however, as we had to keep them up while the shorter columns were put in place. Once all columns were in their footing holes, temporary cross bracing was drilled into the columns to ensure their security in place. Following this, more C purlins were used as temporary scaffolding to create a ledge for the form plywood to be attached.

One major difficulty was ensuring that all columns were parallel. At times all the sides were parallel, but the diagonal would be off. This consequently involved lots of minor movements in order to get it perfect. Following this, we lifted up and Tek Screwed the pre fabricated Y purlins on to the top of the structure. Given that people were trying to drill above their head, we found it easier to have one person helping the driller by pulling the drill towards them from behind the column. This made for much faster application of screws.

Following this, many of the students made up the concrete next to the footings to secure the shady in place. Lots of water was needed in the mix given the heat in Kalkaringi.

At lunch time, many of the students played footy and basketball with the abundance of children on the basketball court. All without shoes, they ran around us cheekily stealing the balls from others and showing off their skills. Whilst at first the kids appeared a little wary, once the ice was broken with one or two of them the rest of them opened up quite quickly.

After lunch, we mixed up a batch of concrete for the footings and poured this into the holes. All the roof purlins were also placed and screwed in, tomorrow we’ll be ready to put the roof sheets on! Luckily it was relatively cool (by Kalkaringi’s standards) today as it has been all week. Tops of 31 and overcast with a slight but consistent breeze. We wouldn’t have been able to be this productive for the last few days if it had been 38 and clear skies.

It being Sunday, the social club and the local shop are closed. We work until 5pm, shower, and head back to camp. Jamie and David have cooked a Thai green chicken curry for dinner followed by damper, which goes down a treat. 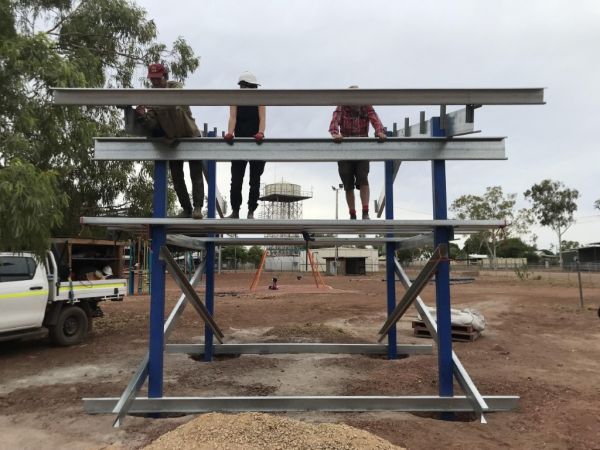 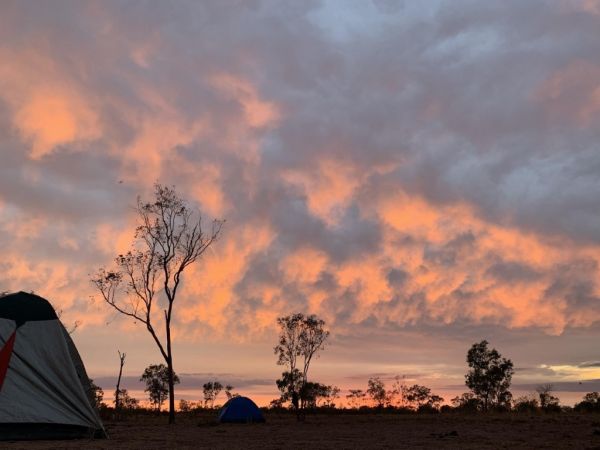